Locked down with three screen-addicted children, a furloughed husband and the dog, Rachael Misiuda needed something to lure the whole family outdoors. Before they talked themselves out of it, she and husband John embarked on an ambitious project inspired by an idea Rachael found on Instagram. By Bobby Twidale.

The last year has changed, possibly forever, how we interact with the world beyond our front door. In a report published in April, the Office for National Statistics (ONS) said the pandemic had forced people to behave in new ways, adding: “Nature has been a source of solace for many, as lockdown rules have heightened our appreciation for local parks and green spaces.”

According to the Horticultural Trades Association (HTA), in the last year, 3 million people have taken up gardening for the first time.

Despite having a large garden, Rachael Misiuda who lives near Melton Mowbray in Leicestershire found her three children struggling to adapt to lockdown, spending too much time on their screens, and showing little inclination to get outdoors.

She, husband John and George, the golden retriever, decided enough was enough and got to work on a major project in the back garden.

Psychotherapist, Rachael, 42, says: “We decided to build the swimming pond because we wanted a project in lockdown. I was all for introducing more wildlife into the garden. And I really loved the idea of having water in the garden, but also having a space that we could use to swim.”

“My vision for it is to have, especially in the summer, a place that is full of plants and colour and wildlife”

Rachael found inspiration on social media and John, 50, a helicopter pilot grounded by the travel ban, was fully behind the idea. Rachael admits: “My husband and I tend to go at things without really thinking them through. That’s not always a bad thing.”

With plenty of time and many hands to make light work of the project, what could possibly go wrong?

The build was more complicated than Rachael anticipated. She says: “We just envisioned it would be a case of digging a big hole and lining it and it wasn’t quite that straightforward. It was also more expensive than we initially thought. It was mainly things like the pool liner, and pumps and plants that were the big expenses.”

In fact, the pond has cost around £7000 to date. Not cheap, but with the average cost of a conventional outdoor swimming pool starting at £50,000 the financial as well as the environmental impact of a pond is far smaller.

Rachael and John found an abundance of inspiration and advice online. “There are some really good people out there who know their stuff and are willing to give their time for very little money,” says Rachael.

Journalist and garden designer Karen Gimson says she’s always worked hard to persuade people to include things such as compost bins, ponds, and wildflowers in their gardens, usually with limited success. “Now number 3 on the list of requirements is a pond – mostly for wildlife,” she says. Karen continues: “Customers do show an interest in having a swimming pond. The only deterrent is the cost of creating such a feature in the garden. Where budgets allow, swimming ponds have been created – satisfactorily blending the needs of humans with the needs of wildlife. It’s wonderful to swim in a pool without the need for chemicals.”

The best way to achieve this and to provide a habitat that will bring wildlife to your garden is by including an area for water and bog plants when planning your pond.

“It’s important to include plants in your swimming pond because that’s going to stop all of the algae.”

Steve Boylan, 55, a garden centre manager and plant expert says: “It’s important to include plants in your swimming pond because that’s going to stop all of the algae.”  They will also provide the natural filtration that will keep water clear and healthy, he explains. 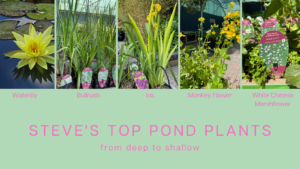 Rachael says the pond is a long-term commitment, expecting it to take three or four years to become established and she emphasises her objective is not perfection. “We’re starting to see some bits of wildlife in the edges where the plants are, and that will hopefully just improve year on year. If you’re at the beginning of the process, I would say go for it. Don’t get too caught up on perfection. I think it’s quite an organic process. My vision for it is to have, especially in the summer, a place that is full of plants and colour and wildlife,” she says.

And progress towards that vision is good – just this week, Rachael has seen water boatmen, diving beetles and lots of new bird visitors to the pond.

The two-legged members of the family are delighted at the results of their hard work. “Natural swimming’s really lovely and refreshing,” says Rachael. George, who refuses to join them in the pond, not so much.

Unlike some enthusiasts, the family have not fully embraced winter wild swimming. “Our initial thoughts were that we’d like to use it all year round. And I think we probably will. We have swum in it in the winter months, and it was bitterly cold. So, the plan is that we will get used to swimming in the summer. And then as it gets slightly colder leading up to winter, we will continue to use it and just get used to it,” says Rachael. She laughs before adding: “Whether that will happen or not? I don’t know.” 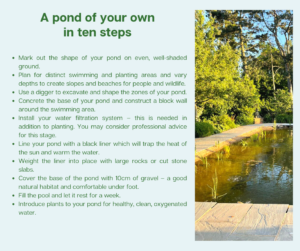 Always consult an expert before undertaking a major project of this type.