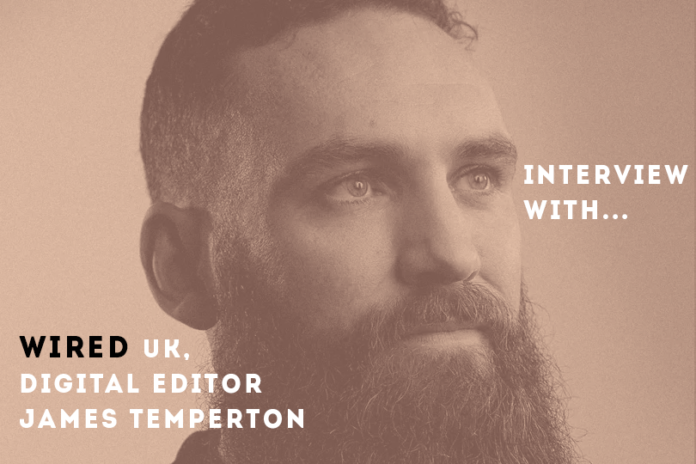 There aren’t many publications that had the privilege of Steve Jobs himself calling to buy an ad on the back cover; that have enough audacity to put a headshot of bruised-up Mark Zuckerberg on the front.

Released right before the heyday of the ‘dot-com’ bubble, in 1993, WIRED quickly became one of the most trusted publications for leading its readers into the digital age and teaching them much needed militant optimism.

Resurrected after a short-lived launch in 1995, Condé Nast ‘wired-in’ British readers with WIRED UK edition since 2009. Although smaller in size than their American counterpart, WIRED UK team focused on no less compelling and groundbreaking stories – thus the multiple ‘digital magazine of the year’ awards.

What is the best part about being the editor of WIRED (UK)?

The most satisfying part about what I do is when a really great story lands on my desk. There’s always great excitement and drive to do the best job possible by telling that story with greatest care and impact.

Also, people. I feel very lucky to be working with a small team of incredibly talented journalists, doing the work that we do.

What keeps you up at night?

Over the last year, it was the pandemic. We work on really big stories that are the result of months of vigorous reporting. That means you have to work with Condé Nast legal team, fact-check again and again to make sure every box is ticked. That you are able to provide evidence for every single sentence.

There’s great relief when it’s published and people start reading it, and no one puts the hand up and goes, ‘that’s wrong!’. All journalists, particularly when it’s a really impactful and controversial story, are afraid of this scenario. So, when all those concerns start to fade after the story is published – that’s a really satisfying feeling. It lets you rest with ease – at least for a night.

Speaking of the pandemic: did it change the way you operate?

Since the team switched to working remotely, we’ve made a really great success of telling stories that we were telling from our desks. All you have to do is just to get a bit creative.

Did it, in any way, make your responsibilities any more stressful?

I suppose we had a few moments during the pandemic. What really adds weight is cutting-in through an industry where there are thousands of articles on hundreds of different topics published every day.

There’s a huge responsibility to be clear and accurate. Because millions are going to read that information and take it on board, change their behavior accordingly.

So, making sure that stories we are choosing to tell are the right stories at the right time – that’s certainly a pressure.

What are the ingredients of a perfect WIRED pitch?

There needs to be something at stake, above everything else. Our coverage of the origins of the UK’s Covid-19 variants is a great example: it’s compelling, it had jeopardy, and it revealed new information.

In the end, really compelling stories are about the individuals. These are the core tenets of a good WIRED story.

If you had to choose one thing to write for the rest of your career, what would it be?

One of the things WIRED family is going to cover for the 10+ years is the regulation of digital platforms. We arrived at the moment in history where there are these behemoth companies – Amazon, Facebook, Google, Apple, Twitter. And it would be foolhardy to believe that the status quo that we have now will remain the same.

So, to answer your question, it would be that – story about how we reshape the Internet to be more beneficial for humanity.

What excites me is that we are privileged to be at the moment in time where we can make really important, fundamental changes of how we regulate big-tech platforms; how we tackle climate crisis. We have the opportunity create a better future.

What scares me? That we get that wrong.