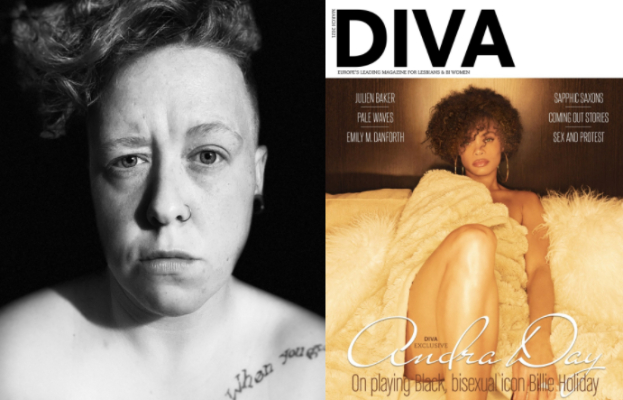 Starting as an editorial assistant in 2013, Carrie Lyell has quickly risen through the ranks at DIVA magazine becoming editor-in-chief in 2017. Here she talks to Isobel Pankhurst about the highs and lows of working in LGBT print media.

Why did you decide to go into journalism as a career?
I always wanted to be a journalist ever since I was about four or five years old. I don’t know where that came from, possibly from watching too much TV. As I became older it became more of a serious ambition and by the time I went to university it was the obvious choice that I was going to study journalism.

What jobs did you have prior to working at DIVA?
I worked in hospitality throughout my time at university. Even after graduation it still took me a few years to get a full-time job in journalism. My first paid gig was a freelance job for The Pink Paper, which I did alongside working in a cafe. I got my first full-time journalism job with DIVA in 2013.

Why did you choose DIVA?
I didn’t really anticipate working in magazines but I did know I wanted to work in LGBT media. I wanted to write about things that I was interested in and as a lesbian, as a queer person, that was what interested me. My friends were all queer, I went to queer clubs, I listened to queer musicians. At university they had told us to find a niche and for some people that was sport or fashion while for me it was being gay, that was what I was good at.

At university they had told us to find a niche and for some people that was sport or fashion while for me it was being gay, that was what I was good at

What does being Editor-In-Chief entail?
I have responsibilities across the whole magazine and brand, including the creative message and output. Throughout the year DIVA hosts a number of events including the DIVA Awards and DIVA Pride, it’s part of my job to ensure that these all align with the magazine itself and the main brand. I’m also very involved with the day-to-day running of the magazine, whether it’s passing on invoices, sourcing images or commissioning writers. We’re quite a small team so I’m a bit more hands-on than an editor of a bigger publication may be.

What’s been your career highlight so far?
There’s been quite a few. A couple of years ago I went to Thailand for an LGBT travel conference at which I got to go swimming with some baby elephants. Being able to interview celebrities like Ellen DeGeneres and  personal heroes such as Billie Jean King has been great. Talking to real-life people and having the opportunity to tell their stories has also been a real highlight. We ran a piece a few years ago about a group of lesbian and bisexual asylum seekers called the Rainbow Sisters and we heard afterwards that the piece had really helped these women with their cases. We heard stories of a solicitor going into court brandishing a copy of DIVA to show the evidence of what these women had gone through.

Have there been any particularly low points?
On social media both the brand and myself come into a lot of criticism from a very small but vocal minority due to our stance on trans inclusion. On a personal level it’s just not particularly nice to open up twitter in the morning to see you’re being called a ‘treacherous snake’ or that you’re ‘throwing lesbians under the bus’ for supporting the human rights of trans people, and you know you’re doing the right thing but it’s still exhausting having to constantly defend your position again and again.

The magazine will continue to offer a voice and a space for people in the community who don’t hear or see themselves represented, we want to continue telling those marginalised stories.

What advice would you give to your younger self?
I’d say to be patient and keep at it, cause in the end you’ll find a way through and find your path. I think I’d give some kindness and encouragement as well. Often as women we can be very unkind to ourselves especially surrounding careers and the creative industry and I don’t think I was very kind to myself.

Do you think there is much of a future in the print magazine industry, especially following the impact of the COVID-19 pandemic?
It is a worrying time and it’s been a worrying time for about the last twenty years, a lot of magazines have seen their sales decline. I do think there’s something of a print renaissance happening at the moment though, certainly I’m reading far more magazines now than I was twelve months ago. There’s a future for magazines that can carve out a space that’s unique and you can’t get online, that’s what I try to do with DIVA.

What’s in the future for DIVA magazine?
We are currently working on lesbian visibility week 2021 which is happening next month. That will largely be digital-orientated due to restrictions but we’re hoping that later in the year we’ll be able to have some in-person events again. The magazine will continue to offer a voice and a space for people in the community who don’t hear or see themselves represented, we want to continue telling those marginalised stories.